Every choice has consequences, and as unrest surges in the factions all around her, Tris Prior must continue trying to save those she loves, and herself, while grappling with haunting questions of grief and forgiveness, identity and loyalty, politics and love.

After reading the first book I told myself I would wait with reading the second book until I could get my hands on the third book. But I have to admit it, I couldn’t wait, after seeing the trailer for the movie Divergent I just had to know what would happen next.

On one side I’m glad I’ve read the book because I absolutely love dit! But on the other hand, waiting for the third book will be so much longer now. Honestly I did curse Trish a couple of times in this book. She has a feeling she has to be the hero, but if you ask me sometimes she makes stupid decisions. But that makes her human and makes me look at her as a great character for leading a series.

I can’t wait to read the last book in this series, I’m just dying to know what is going to happen to this world that Veronica Roth created.

So today I’m doing a Launch post for the book Crash into me by Tracy Wolff! I just love the cover for this book. So without keeping you waiting here it is:

And of course you would like to know what this book is about:

She’s totally off limits, but this rocker wants a taste…

Jamison Matthews has lusted after Ryder Montgomery since she was a preteen. But now that Ryder and her brother’s band, Shaken Dirty, has made it huge, she’s just one of many pining for the brooding lead singer. Too bad Ryder still sees her as a little sister. Not that it matters. Her brother would never allow it, and the last thing Jamison wants is to be another notch on a rock star’s bed post. Even if it’s Ryder’s.

Ryder doesn’t deserve happiness. After his fame destroyed his last girlfriend, he swore he’d never fall in love again. So when Jamison, the girl he’s been in danger of loving for years, joins the band on the road, he’ll do anything to deny the sparks between them—even after one hot night together. But Jamison is determined to show Ryder that he’s worthy of love—her love—and that she’s all grown up…and ready to play.

Just to tease you here is an excerpt from the book:

Excerpt CRASH INTO ME-

Onstage, the band launched into “Awake,” one of the power ballads that had made them famous. The crowd screamed their approval and so did she. Totally not her typical modus operandi, but she couldn’t help it. Something about listening to Ryder croon the darkly haunting lyrics had her knees trembling and her heart beating much too quickly. If she closed her eyes, she could do what all the other women in the audience were doing and pretend that he was singing straight to her.

So much better than remembering he’d written these heartfelt words for another woman. For Carrie, who had killed herself and broken his heart so many years before. Her own heart ached at the thought. For him. Always for him. At twenty-nine, Ryder had already been through more darkness and despair than any one person should have to handle.

“Awake” finally came to a close, the last note hanging in the air for long, tension-fueled seconds. Then the band fell silent and the audience did the same, as if they were all holding their breaths. Ryder lowered his guitar, shuffled, and stamped his feet once, twice. It was a familiar gesture, one years of experience had taught her was his way of shaking off excess emotion. Again her heart twisted. It devastated her that more than ten years after the fact he was still eaten up by what had happened. Still determined to bury it under a bunch of layers that not only insulated him from his pain but also hid the real Ryder so deep inside the public Ryder that she wondered sometimes if he even existed anymore. Or if the boy who had held her while she cried, who had let her whisper her pre-adolescent fears without ever making fun of her, had disappeared forever.

She searched for him in that one endless moment.

Looked for him in the obsidian eyes that arrowed to the heart of the crowd even as they barricaded his own emotions.

Combed through her own memories and expectations in an effort to see Ryder as he really was instead of how he portrayed himself.

And when his eyes—his crazy, beautiful eyes—met hers, she found him. Seconds passed, long, intense seconds where she lost the ability to hear or breathe or even think. All she could do was look into Ryder’s eyes, at the feral heat boiling up and out of them, and want.

She smiled at him, waved. He snarled back. But it wasn’t a leave-me-alone snarl. No, definitely not. It was his I-want-to-fuck-you-up-against-a-wall snarl—she knew it well, had seen it directed at a lot of women through the years—and her knees gave way when she realized that this time, finally, it was directed at her. It didn’t matter that there was no sign of recognition in his eyes, no knowledge that the woman he was looking at like that was actually her. Jamison. For one moment, he wanted her the way she’d always wanted him.

It was more than enough.

And if you love it just as much as I do this is the link where you can buy the book:

Buy Links for Crash Into Me

If you would like to know more about the author of this book just follow one of these links: 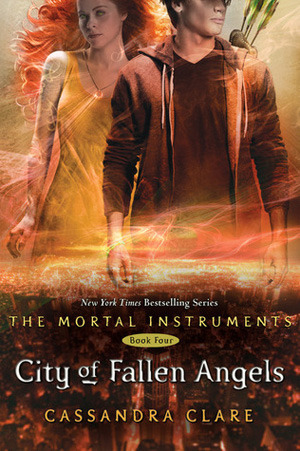 Clary is back in New York and life is good: she’s training to be a Shadowhunter and is finally able to call Jace her boyfriend. But nothing comes without a price. When Jace inexplicably begins to pull away from her, Clary is forced to acknowledge that she herself has set in motion a chain of events that could lead to the loss of everything she loves. Even Jace.

Love. Blood. Betrayal. Revenge. The stakes are higher than ever…

I’ve been a fan of this series from the first book, I love the whole world created around the shadowhunters. After finishing the third book, it took me some time to start reading this one. I simply didn’t know where the story would go and if I would still like it.

Well I can tell you I still love the world, the characters and the story line. It didn’t take me long to get into this book and forget the world around me. Just like in the other books I felt like a part of the shadowhunter world.

Because in the beginning you get more stories you want to turn every page to read what’s going to happen to the characters. I couldn’t put this book down and that resulted in reading long after I should have been asleep.

Another great book in this series and I can’t wait to read the next book.